Help From Homebuilders
Giving Back to Our Community… 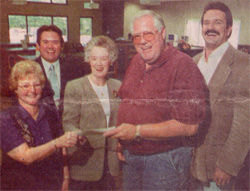 Cherokee Homebuilders are coming to the rescue of the county’s library system.

The homebuilders presented the library system with $800 to help fund operations at the Rose Creek Public Library and library representatives were invited to a November meeting of the association to discuss library service and the cost involved.

“[The homebuilders association] realizes the impact a good library has on the future of any community,” Sequoyah Regional Library Director Joan Adam said. “This is an economic reality. The dramatic increase in population, particularly in the southern section of the county, has increased the cost of doing business.”

Nick Fogarty, development director for the Sequoyah Regional Library System, said a partnership may be in the works with the homebuilders association and others to provide the kind of library service the public is seeking.

Fogarty said the homebuilders are leading the way for the system’s new Alliances for Libraries program set to begin after the first of the year.

“The reason they’re the pilot is because they came to us,” Fogarty said. “We did not intend to roll this out quite yet, but they came to us right after the budget hearings were finished.”

Fogarty said the Alliance program came about as a result of the recent budget process on the advice of county commissioners to find funding sources outside of tax dollars.

What we are going to do is go into the business community and ask different businesses to adopt a library branch in some fashion,” Fogarty said.

He said partners will not be asked to help with 100 percent of a library’s expenses, but will be offered tailor-made options such as direction contribution, in-kind donations and more than 20 other ways of giving.

“The reason this is a little different than most of our other drives is that we’ve always done the other drives for a specific purpose,” Fogarty said. “this one is unique in that this is a general operating initiative. This entire incentive will be for operating expenses.”

Collecting donations from chapter meetings and helping to sponsor other events are some of the support efforts in the planning, according to McKenzie.

“I also see us helping in this Alliance for Libraries as far as getting out there in the community and soliciting a lot of these business owners,” McKenzie said. “When we approached the library, we were interested in looking for a way to support them not as a primary supporter, but supporting the things that they do already.”