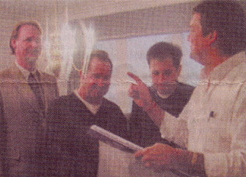 From the Cherokee Tribune

The home for the planned Canton Labor Support Center still needs major construction before it can open its doors.

The center’s director Jaime Escamilla, who was hired this month, met with community leaders and city officials for the first time Thursday to discuss the center.

The center, which will serve day laborers and their families, is to be housed in the Iglesia Christiana Monte Del Sion Church on Marietta Road in Canton.

Laborers will be able to come to the center to be matched up with employers seeking help. While there, they and their families also will be able to access free goods and services to help them adjust to their new community. While the center will be open to all day laborers, it primarily will serve the growing population of Spanish-speaking workers.

But there still is much work to be done before the building will meet fire safety regulations and before the city can allow it to be used as a labor center. Gonzalez said he has been unable to finish renovating the building because of lack of funds. The church soon will receive an estimated $8,000 in a tax refund from the city and county for property taxes paid over the last three years.

MUST Ministries, the local nonprofit service organization overseeing the center, has allotted $60,000 to be used for construction and operations in 2002. Church members and local community officials also have donated money.

“But the lion’s share of the money is going to have to come from the community. We’re relying heavily on community support,” MUST Executive Director John Moeller said. Crosby said he can’t estimate how much work needs to be done to meet code since he has not seen building plans or inspected the building.

He made plans to inspect the building with Gonzalez, Escamilla and builder Steve McKenzie early next week. The building could possibly be renovated piecemeal to meet the labor center’s budget needs, Crosby said.

Canton Fire Department Fire Inspector Mike Perry said depending on the layout, it may be possible to partially install a sprinkler and alarm system to free up a portion of the building so a small area of the center can open. Until the building is up to par, the church must hold its services at another location.

Lionel Stutz of Canton, a member of the center committee formed by Canton Mayor Cecil Pruett, said while it is unfortunate service must move, the building being closed also is a positive. “It will motivate everybody to move forward,” he said. Escamilla said he is excited about the energy and level of interest in the center. Now it’s just a matter of sorting out the details, prioritizing needs and forming a strategy, he said.